Something happened that I didn’t expect. Looks like for 2019, I’m taking karate again! It happens to be January, a new year, so it’s a good time to start a new thing. Or in this case, renew an old thing.

Last week, my youngest son had his birthday and became old enough to join karate with his 4 older brothers at our local YMCA. My wife is also in the adult class. So my entire family is doing this; I was the odd man out.

I attended last week to watch my boy in his first karate class. But it also meant seeing my old classmates too; and they have advanced!

Let me back up a bit. I joined this Kyokushin Karate class in 2016. I practiced for a year and ranked up a few belts.

But in 2017, stress and anxiety clobbered me. I got on some meds for it and felt my life severely thrown off by anxiety attacks. Homeostasis was not happening.

So I paused my karate attendance (and blogging) to just get myself started on back to ‘normal.’ Weeks turned into months, which rolled over to a year. After a while, I felt I just couldn’t go back to karate.

I improved greatly over time in having less stress and anxiety. But mentally, I was blocked from karate. Defeated by myself, my own mind prevented me from returning. Plus I still had uncertainty about being physically capable of the rigorous exercises with kicking and punching and sparring.

Watching my whole family and my old buddies practice karate last week naturally got me thinking about rejoining. My brain did a bunch of mental gymnastics and decided it was still not a good idea.

But suddenly yesterday, I found myself reconsidering. And I found a spark of interest, a small hidden flame of desire to complete my training (like Skywalker). I want the next belt color: blue!

So I decided to “try again.” Rejoin, I would. I need to stay in shape and be more physically fit. I could at least be another human punching bag for the others.

In the end, I quit the mental gymnastics to rejoin karate! I stopped letting my mind defeat myself. Fear, doubt, worry…these enemies blocked my path.

I think half the battle of practicing martial arts is simply just showing up to class. Just get myself there first. Then the rest should work out. 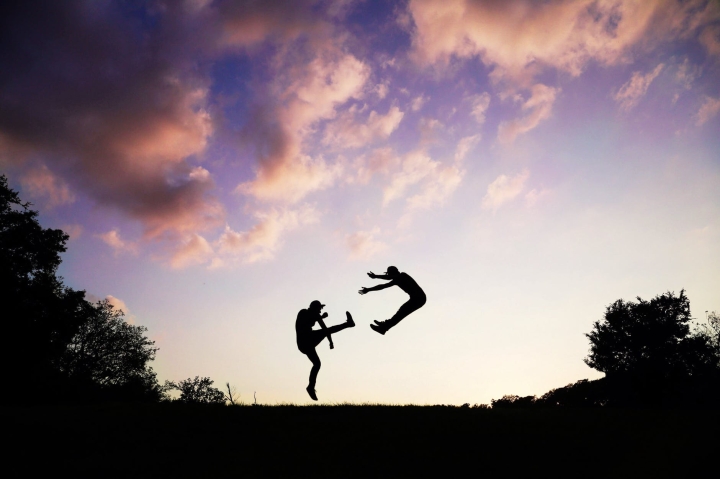 I’m excited and happy that I am recommitting to the discipline of karate practice. For me, it’s not so much dreaming I will be like Ip Man someday, or my childhood hero Daniel LaRusso.

It’s about sticking with something and finishing what I started no matter the difficult circumstances and imperfect details.

And in my case, the family that fights together, grows together. Let’s have some fun.

3 thoughts on “Karate And Mental Gymnastics”